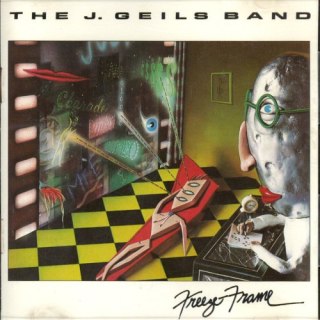 Frankly, I never thought I’d live long enough to see The J.Geils Band with an American number one and a UK hit as well. Still, if they had the patience to wait until their thirteenth album then there’s no reason why i shouldn’t. Old fan’s will be glad to hear that they show no signs of growing up; still they prefer to sing of scantily-clad maidens and all night parties. This is old fashioned, guitar driven, harmonica-aided rock and roll – ill mannered, flashy and more than a little calculated. Not for those with delicate tastes. Personally i like it. (7 and half out of 10)

From the raw urban blues of their debut album to the beefy synth-pop of this 1981 set was a long winding road. In America where the J.Geils cult far outnumbers its British equivalent, their graduation to real chart success was greeted with howls of pleasure. In Britain, all it meant was that the Geils Band was consigned to the same AOR ghetto as Billy Joel and Foreigner, despite the sly commercial appeal of the hit singles, “Centerfold” and the title track. At heart, they were still a blues band, and their pop move was no more contrived than the New York Dolls. But Freeze Frame sounds very much like a period piece from a period that wasn’t much fun to live through.